Vladimir Ilukhin: “Energetics is the backbone of economics of Kamchatskiy krai” 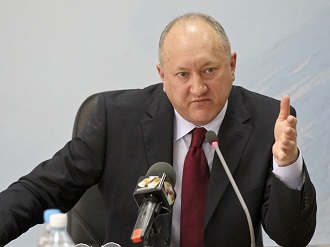 Briefing of the Governor of Kamchatskiy krai Vladimir Ilukhin was held. The main theme of the briefing referred the results of the meeting with RF Presidential Plenipotentiary Envoy to the Far-East Federal district Viktor Ishaev, where the Program of Far East electroenergetics development till 2025 had been discussed.

During the discussion with the journalists Vladimir Ilukhin noted that necessity of such program development had come to a head long time ago but the developers hadn’t taken into account peculiarities of the subjects of Far East as energetics of many subjects had local character. The governor stressed that that day there was abundance of electric energy output on such territories. But for all that there was a huge deterioration of generative objects and power circuits.

“Necessity of the Program development, necessity of energetics modernization came to a head long time ago already”, - said Vladimir Ilukhin.

Integrated Program of Far East Federal District electroenergetics development till 2025 is worked out in accordance with the instruction of the Chairman of Russian Federation Government Vladimir Putin. Nowadays the developers of the Program are making alterations which were proposed during the meeting with RF Presidential Plenipotentiary Envoy to the Far-East Federal district Viktor Ishaev.

“I’m sure that when the Program starts working we will be able to commence active modernization of energy complex, - the governor noted. – I have already said repeatedly that energetics has been the backbone of economics of Kamchatka, that’s why standard of living of Kamchatskiy krai depends on its development level”.

Answering the questions of the journalists of the role of gas in energy complex of Kamchatskiy krai Vladimir Ilukhin explained that currently the part of gas consumption in energetics of Kamchatka amounted 25%.

“Gas arrived in Petropavlovsk-Kamchatskiy. HPP-2 runs on this kind of fuel, now there are operations on transfer of HPP-1to gas. According to plan by the end 2025 we must have 86% of gas consumption in energetics. Like today remaining requirements are quite successfully replaced by the work of Tolmachevskaya HPS cascade and Mutnovskaya HPS”, - said the head of the region.

There are also plans on the development of hydro energetics. The governor of Kamchatskiy krai Vladimir Ilukhin informed that recently they planned construction of one more forth line of cascade in addition to three working lines of Tolmachevskaya HPS.

“I hope that coming of “RusHydro” to Kamchatskiy krai will bring stabilization to energy complex of the peninsula. At the same time we will get rid of monopoly existing today. As to HPS construction, I consider that in time it will become the main generation of electric energy along with gas”, - noted Vladimir Ilukhin.