Friendly Kamchatka grins and bears it for photographer Igor Gushchin 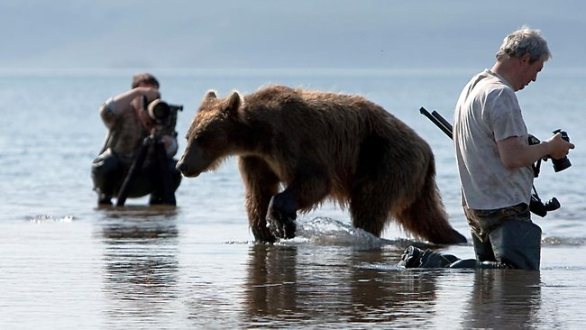 HE'S going about his business, fishing for some dinner, when a pesky photographer comes up a shoves a camera in his face.
Rather than remove the man's head with a single swipe of his paw, as he could very well do, this inquisitive brown bear nudges at the lens with his nose.

Fortunately, the photographer is alert enough to press the shutter and the result is the amazing shot above.

Igor Gushchin was the man on the other side of the hand held camera and said he was surprised at the bear's friendliness.

"I was expecting to get some shots of the bears fishing into the lakes, but I never thought one would get so close to me as it did.

"The contact between humans and bears is so unusual, it's extremely rare to see.

"But it was such an incredible moment - I will never forget it."

The photographer was accompanying an expedition to study the bears' behaviour at the time red salmon go to spawn at the Kronotsky Nature Reserve in Russia.

Hungry and hankering for some sushi, the presence of the fish usually draws the bears out into the open and the reserve is a great place to spot them.

In Russia's remote far-east, Kronotsky is a World Heritage listed UNESCO site and is only open to scientists and about 3000 tourists a year.

Visitors arrive by helicopter and fork out around $700 for a day trip, but many are willing to pay the price to catch a glimpse of the amazing mountain ranges, volcanoes, geysers and of course, the wonderful wildlife living in the park.

However, those travelling to the park with intentions to take similar photos are reminded Mr Gushchin is an experienced wildlife photographer.

While they might look cute, brown bears are the world's biggest land-based predators and are known for their unpredictable behaviour when it comes to humans.

Of his bold interaction with the Kamchatka Mr Gushchin said: "We have learned the behaviour of bears and are strictly guided by safety rules."

"But it's impossible to eliminate the risk of being so close to wild bears, and I wouldn't recommend anyone try and repeat this experience themselves.

So perhaps just invest in a top notch zoom instead.