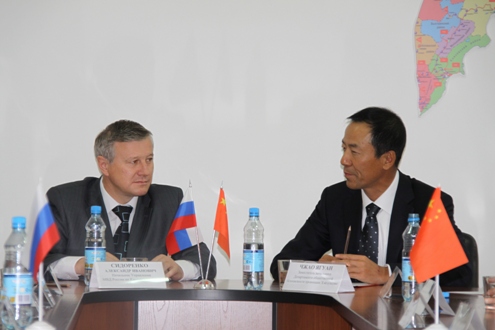 Six guards of law and order from the Department of public safety of Heiluntszyan province of People’s Republic of China arrived in Russia for working meeting with the heads of the Department of Internal Affairs of the Far-East District. They visited Kamchatka. Official representative of Public Security Police of People’s Republic of China in Khabarovsk, Chzhan Dachun, also took part in the meeting.

As it turned out there stored many common themes which were discussed at the meeting. Among them are passport and visa inspection, prevention of drug and psychotropic drug distribution, search of criminals avoiding responsibility and many others.

“We’ll have to work out the general algorithm of cooperation in all problem aspects, and it won’t hurt just to get acquainted with foreign colleagues. Especially because, as it turned out, the opinion of Chinese policemen in many questions coincides with ours”, - the chief of DMIA of Russian Federation in Kamchatskiy krai, Alexander Sidorenko noted.

The sights of Petropavlovsk-Kamchatskiy were shown to the delegation; the guests were taken to the Pacific Ocean. Everybody was charmed by funny and sociable Bao Yuidzun – commander of separate detachment of the main department of international cooperation of public security in Heiluntszyan province, who showed quite good knowledge of Russian.

At parting the policemen of two countries exchanged memorable presents.

At the picture: the chief of DMIA of Russian Federation in Kamchatskiy krai, Alexander Sidorenko, and the deputy chief of the Department of public security of Heiluntszyan province, Chzhao Yaguan.