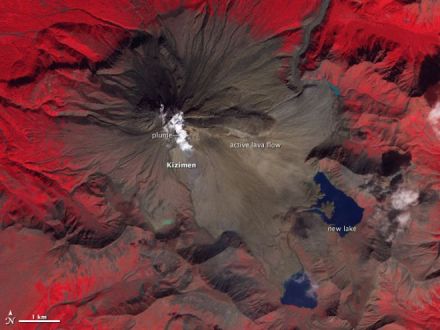 A prominent lava flow descends the eastern flank of Kizimen Volcano, located  in the Kamchatka Peninsula (Russia) in this false-color satellite image acquired on September 4, 2011.

Volcanic deposits (colored brown) have covered much of the vegetation (red) on the slopes of the volcano, especially to the east. Likewise, material has filled rivers and streams around the volcano. A modest volcanic plume rises from Kizimen’s summit, accompanied by a smaller plume from a fumarole to the northwest.

These images illustrate the growth of a stratovolcano: layers of lava flows alternate with layers of “volcanic ash, cinders, blocks, and bombs.” Unlike fluid hawaiian-style lava, the flow on Kizimen is a block-lava flow, so viscous it’s almost solid. As the flow slowly advances down the east side of the volcano, the surface crumbles, sending boulders, rocks, pebbles, and other material tumbling into the valley below.

In less than a year, this rubble piled high enough to block several drainages, and a new lake was formed. Ash and fine sediment color the lake brilliant blue, in contrast to the nearly black shade of the lake in 2009. Famous stratovolcanoes include Mount St. Helens, Mount Fuji, and Popocatepetl.

These images were acquired by the Advanced Spaceborne Thermal Emission and Reflection Radiometer (ASTER) aboard the Terra satellite.