Extreme auto-show in the center of the town 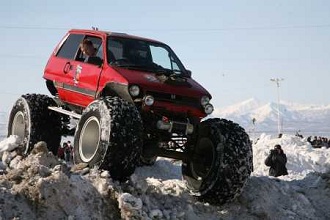 This extreme motor show was showed to the citizens by the best representatives of Kamchatka SUV movement on the square in the center of the town on 2 March. 14 cars participated in the contest. Among them were quite familiar to urban road cars, and huge, specially prepared "monsters" for forest trails and for overcoming obstacles.

The participants coped with complex geometrical constraints in the form of concrete blocks and huge snow slides that were several times higher than the machines effectively and easily.

If someone seemed that the track was easy, but not only participants running the «Toyota Delica», where broke the wheel hub and the driver running «Nissan Safari», which will restore pneumatic suspension after the contest.