A sled dog race "Malkalu-2013" has started in Kamchatka 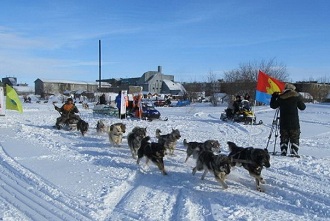 The traditional dog-ledge race "Maklalu" started from the village of Ust Karaginska on Monday, February 18.

Nine teams came out of the northern village of  Tymlat in the direction of Ossory in 10 am, and just after 1:50:18 seconds when 38 kilometers and 300 meters were passed, finished the first musher. The first phase proved to be quite difficult. A strong wind rose and it was snowing. Visibility was less than 100 meters. Rides were accompanied by snow mobilists.

The winner of the first stage of the race became the youngest participant – fourteen year old Kirill Salakhov. Second, via 1:56 :47 seconds finished Andrej Pritchin. Third to Ossory got Eugene Kutynkavav, he finished in 2 hours 3 minutes and 24 seconds after the launch.

In the second stage of the race dogteam drivers and their dog teams have to go 55 kilometers before the checkpoint Makarevsky.