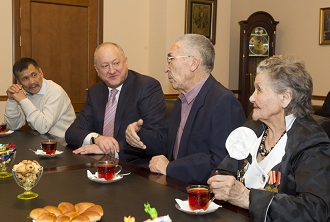 Vladimir Ilyukhin met with the elders of the indigenous minorities of the North, Siberia and the Far East, to sum up the outcomes of outgoing year 2012 and to talk about plans for next year.

Vladimir Ilyukhin named the last name of a possible candidate for the post of the head of administration in Koryak Okrug and stressed the importance of establishing effective collaboration with the provincial ministries and Northern lands.

The Participants also discussed possible transfer of administration from Palana to the District of Tigil.

The head of the region shared his plans with the elders to purchase 1500 deers and a possible moratorium on deers culling, which is planned to be introduced in Kamchatka for the next 3 years.

Vladimir Ilyukhin also added that there will be built the first 4 models of midwifery in Olutorskiy area in 2013. Over 3 years they will be built 14.