Vladimir Ilyukhin attended a meeting of the Federation Council 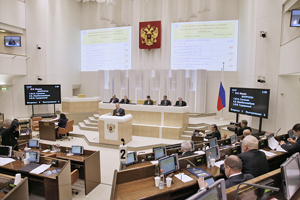 On the 28 of November Viktor Ishayev spoke on the accelerated development of the Far East, in which he accentuated that Far East is a powerful territory, but standard of living here is still low.

While commenting Viktor Ishayev’s speech, Kamchatka territory governor accelerated that the development of the Far Eastern territories require special mechanisms of the state regulation including tax breaks for entrepreneurs.

Vladimir Ilyukhin said that the topic of state-private partnership is very actual. There are already several large projects in Kamchatka which will be realized on state-private partnership. One of them is construction of a modern air terminal building. Now Elizovsky airport is under reconstruction of the runaway. It is very expensive project, but it is necessary for Kamchatka. Thanks to the development of new forms of cooperation between the state and business with the completion of the reconstruction of the airport there will be a project of construction a new air terminal building, which will meet all international standards.

Vladimir Ilyukhin also added that now he pays great attention to the development of the northern territories.