Prime Minister Dmitry Medvedev visits the Inter-Regional Centre for Collecting, Processing and Sharing Monitoring and Forecast Information on Earthquakes in the Far East and Tsunamis 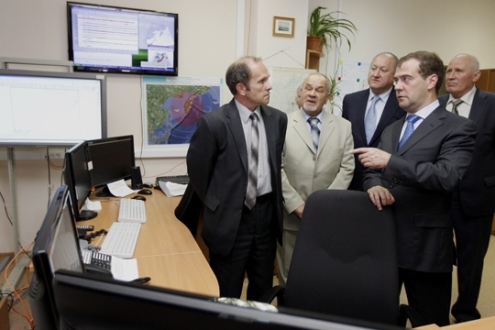 The prime minister asked employees about their main work-related concerns. In particular, Mr Chebrov said that there was a severe shortage of seismic recording stations in the Petropavlovsk-Kamchatsky with only 14 in place, whereas the city needs 100 of them and the Kamchatka area needs 400 such stations.

"The network of stations needs to be expanded as soon as possible," Mr Medvedev said. "No one knows when the next earthquake is coming." He also promised to issue an instruction to draft a programme for expanding the network of stations in Kamchatka, the Kuril Islands and on Sakhalin and addressing this issue across the entire seismic area in the Russian Far East, adding that the programme should be developed in conjunction with the Academy of Sciences.

When asked about the current seismic situation in Kamchatka, the centre's employees said that the situation was calm.

"So far," the prime minister added.