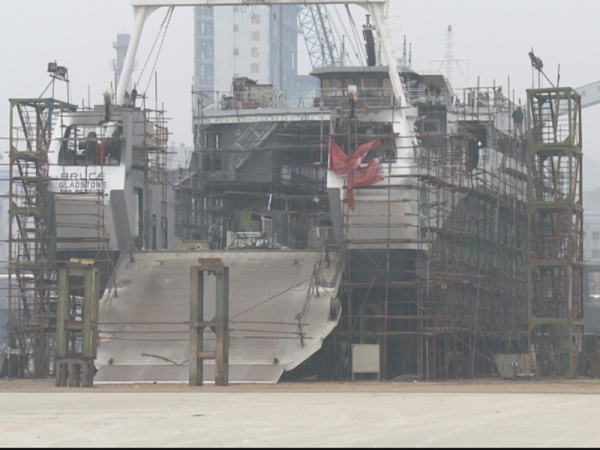 Cargo and passenger ship “Vasiliy Zavoiko”, construction of which is conducted on the shipyard of Dalian (PRC), will ply its first voyage to the north of Kamchatka this autumn already. Minister of transport and road building of Kamchatskiy krai, Sergei Pahomov, expressed his assurance of that fact after he visited the shipyard and got acquainted with the way of construction works.

A decision of cargo and passenger ship construction was made by the Governor of Kamchatskiy krai, Vladimir Ilukhin. The name of a new vessel was invented practically at once – “Vasiliy Zavoiko”, in honor of the first general-governor of Kamchatka.

“Vasiliy Zavoiko” must partially solve the problem of transport accessibility of northern villages of the peninsula. It’s supposed that the new vessel will carry our regular passenger operations between Petropavlovsk-Kamchatskiy and distant population places situated on the western and eastern shores.

“The vessel is built by unique individual project, - Sergei Pahomov told, - its length is more than 75 meters, berths are designed for 36 passengers, and the hold is for 150 tons of cargo, that means that the passengers will be able not only to get to destination point, but also to carry a big quantity of things. On board of the plane one can take only 10-20 kg as is known.”

Recreation rooms, a gym and a sauna are provided on board of the vessel besides comfortable berths. On top of that “Vasiliy Zavoiko” will have advanced ice class that will make it possible to ply voyages in northern latitudes up to Anadyr.

Contractor by state order is the company “Month”. Executive director of the company Andrey Serikov explained order replacement on the foreign shipyard in as follows: “Today Dalian stands the second in the world by volumes of civil shipbuilding and it has chances to take the leading position soon. On the shipyard in Dalian we were offered the shortest time of order execution, high quality and a reasonable price. The fact that next to our vessel ferry boats for Indonesia and Australia are built confirms that we made adequate choice.”

Now four sections are ready, back of the ship will be laid down recently. Launching is planned on July 20, 2012, in the second half of September 2012 “Vasiliy Zavoiko” will take a ply from Dalian towards the shores of Kamchatka.

“We direct all our efforts to control of the way of the ship building, - minister of transport and road building of Kamchatskiy krai, Sergei Pahomov, told, - and there is one task before us: this autumn “Vasiliy Zavoiko” must ply its first voyage to the north of the peninsula.”