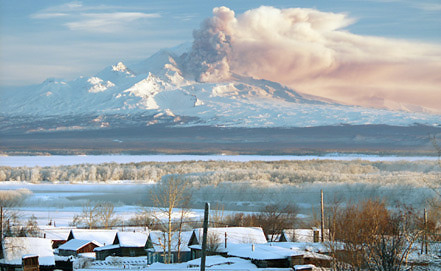 A series of disharges of ash from the crater of volcano Shiveluch has been recorded on the Kamchatka Peninsula. Those posed no hazard to the population, a source at the Kamchatka Branch of the Geophysical Service of the Russian Academy of Sciences told Itar-Tass on Wednesday.

According to seismic data, five earth jolts were recorded in the volcano area, accompanied with the discharges of volcanic dust to altitudes ranging from 5.4 kilometres to 7.2 km above sea level. There was no word from nearby inhabited areas about any ash fallout. Visually, the ash discharges were not observed owing to blizzard.

Shiveluch is Kamchatka's northernmost active volcano. Is is situated 450 km north-east of Petropavlovsk-Kamchatsky. The nearest inhabited area -- Settlement Klyuchi (water-springs) is situated at a distance of 50 km from the foot of the volcano.

The absolute altitude of the volcano is 3,283 metres. The top point of the active part, referred to as Molodoi (young) Shiveluch, is 2,500 metres; the diameter of the crater is`1.5 km. The Young Shiveluch has been active since September 1980. Continuous monitoring of the volcano has been conducted for more than 30 years.
You undertake not to copy, store in any medium (including in any other websites), distribute, transmit, re-transmit, broadcast, modify or show in public any part of the ITAR-TASS website without the prior written permission of ITAR-TASS.