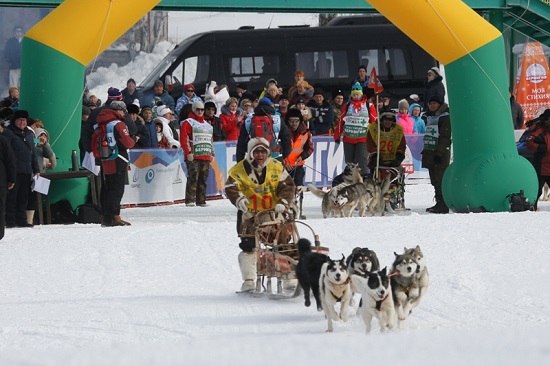 Sled dog race “Beringia-2017” started in the village of Esso on Sunday, March 5, 2017. Fourteen mushers from different areas of the peninsula and two representatives of Chukotka Autonomous Okrug are struggling to become a winner.

“The team is good; people are well prepared and friendly. I hope we will finish as a whole and ahead of schedule”, - said Andrey Rudovich, the Head of the sled dog race “Beringia-2017”.

Despite the current race is the longest of the last 15 years, mushers are not frightened of it. They are ready to face all possible challenges.

“We are in fighting mood. We have been training for the whole winter. However, it is warm for my dogs now, they are hot. The snow is soft and deep. I am afraid they can hurt their paws. Beside this everything is OK”, - said Ivan Nivani, an experienced musher.

“Our life in northern environment is a big challenge. So we have received enough conditioning to pass the Beringia race from start to finish”, - said Valery Sokolov, the participant of “Beringia-2017”.

It is the first time in the Beringia history one can follow the mushers in the Internet. Each sportsman have received a named GPS-tracker. The broadcast has begun at the same time with the start of the race. You can find the following site on the main site www.beringia41.ru.

The musher are supposed to finish in the village of Ust-Kamchatsk tentatively on 28 Match.

Text and photo: Press Office of the Governor and the Government of Kamchatka Kray.