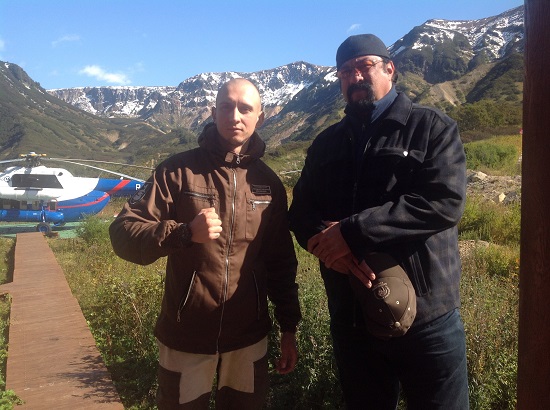 During his visit to the peninsula the famous actor got know the protection system in Kronotsky Nature Reserve and the South Kamchatka Sanctuary and supported the idea of using new technologies in this area.

During the trip to Kuril Lake Steven Seagal said that he had seen bears in Alaska many times shooting his action movie "The dead zone". He was surprised with bears' brood of 4 and even 5 cubs fixed in the South Kamchatka Sanctuary. The specialists explained that it could be possible only in very favourable live conditions created in the sanctuary. Seagal took the special interest in protection means of the big and, according to the actor, unique and fantastic territory.

Operational team patrols territory of Kronotsky and Koryaksky Nature Reserves and the South Kamchatka Sanctuary all the year. State inspectors overpass hundreds of kilometers on foot, by skis and special transport at any weather.

"In the near future we are planning to work quadrocopters in practice, - said the senior state security inspector of "Kronotsky Nature Reserve" Aleksandr Bondar at the meeting with the film star and aikido master. - At first we need to prepare specialists to operate unmanned technique in mountainous areas for realisation this idea".

Nowadays, unmanned aircrafts are actively used in national parks of many countries for fire detecting, catching poachers and groung surveying. Steven Seagal supported the idea of using new technologies for protection of Kamchatka reserve territories. "The main task of the rangers is to catch poachers in time and prevent any crime against nature, - said Steven Seagal. - Drones are indeed effective for this."
KamchatkaPetropavlovsk-Kamchatsky11
Weather in Petropavlovsk-Kamchatsky